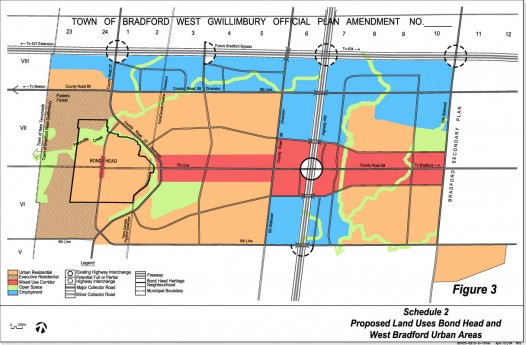 Bousfields was part of a multi-disciplinary consultant team retained by Geranium and Metrus Developments. Through a public participation process, Bousfields led the development of an urban design concept plan and prepared urban design policies for the proposed Secondary Plan of an expanded Bond Head mixed-use residential community. The resulting plan was to structure limited growth in a manner that protects and enhances the urban design amenity of the existing village in its rural landscape.

Major structuring elements include: an improved civic and commercial centre of the village area; a pattern of improved existing and new local streets to provide physical and visual connections between areas of the village and areas beyond; a pattern of well-defined and linked parks, trails, natural areas and accessible open spaces; and a “natural” boundary for the village, comprised of existing natural features and open spaces, existing woodlots, and new recreational parks. The project has now received draft plan of subdivision approval.