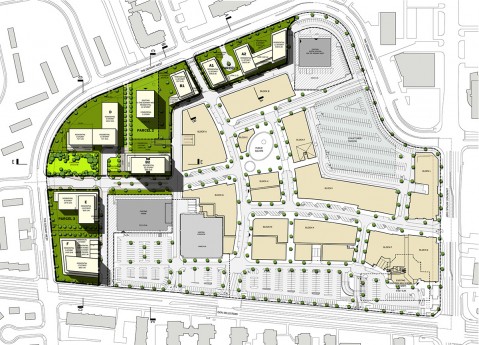 Bousfields was retained by Cadillac Fairview Corporation Limited to assist in securing site plan approval for a new outdoor shopping and entertainment centre commonly referred to as an open-air lifestyle centre. Located at the southwest corner of Don Mills Road and Lawrence Avenue East, the Don Mills Centre is at the heart of the Don Mills community, which is recognized as the first large-scale modern community of the post-war era developed solely by private enterprise. The retail master plan proposes to redevelop the 17 hectare parcel with 12 new free-standing buildings totaling just over 500,000 square feet of retail and office space. The proposed open-air lifestyle centre, the first of its kind in Ontario, is strictly commercial in nature and is to include a residential component in a subsequent phase of development.

The project was approved by the Ontario Municipal Board in May 2006, with the support of City staff. Bousfields was part of a large multi-disciplinary consulting team which successfully secured site plan approval. The site plan approval presented many technical challenges and is noteworthy because of the highly detailed urban design code that was written in collaboration with the City’s Urban Design Division. After the commercial planning was complete, Bousfields was retained by Cadillac Fairview Corporation Limited, and subsequently by Fram Building Group, for a residential redevelopment. The intensification project included the redevelopment of the existing parking areas for eight residential buildings ranging from 11- to 32-storeys in height and containing a total of 2050 units. The plans included the addition of a new community centre and a new public park, as well as the provision of high quality urban design and landscaping on a new private street network.

For the residential component, Bousfields was responsible for the Planning and Urban Design Rationale, facilitating the public consultation process, and preparing applications for amendments to the Official Plan and Zoning By-law. Peter Smith provided expert evidence at the Ontario Municipal Board in support of the project and the development obtained full approval in March 2011. The project is the largest redevelopment of an existing shopping mall that obtained approval in the City. The project is currently under construction.